In Memory of Caryl Matrisciana | thebereancall.org
Skip to main content

Home In Memory of Caryl Matrisciana

In Memory of Caryl Matrisciana

Our sweet friend and sister Caryl Matrisciana has moved on from this earth into the presence of our glorious Savior, joining many of our dearest brothers and sisters who have left us in just the past few years. There is no question that they have gone to a better place and would never want to come back, but we mourn the loss of lives that seem to have been taken too soon.

Caryl Matrisciana was a woman of great talent. Not only was she a gifted and articulate speaker, writer, and film producer, but she was also an artist, a skilled gardener with a love of flowers, and, most important, one who had a passion and a love for Jesus and for people. Her friendliness and engaging personality attracted individuals from all walks of life.

An avid tennis player right up until her final months on earth, Caryl had always been in excellent health. A horrific bicycle accident a couple of years ago left her with lingering pain in one of her legs, but that didn’t stop her from playing tennis, exercising, and working at the same incredible pace that she had always kept.

Right when it seemed that she was on the mend from the accident, she received a diagnosis of breast cancer. Just as Caryl had always researched every thread of heresy that threatened to invade the body of Christ, she added to her list the new assignment of digging into the source and cure for this invader of her own body. Before she had even consented to surgery and possible chemotherapy and other treatments, she received the news that the cancer had spread to her lungs and to her bones. A special form of chemo was prescribed and she put herself on a very rigid diet, which required amazing discipline to follow. 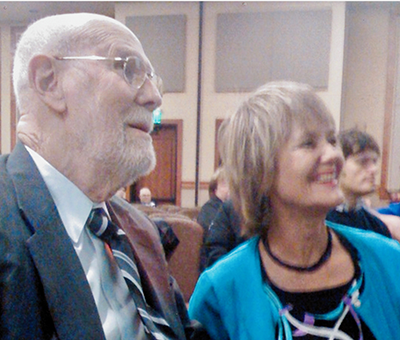 Her dependence on the Lord grew even stronger during that time, and as a friend who lived nearby and spent quite a bit of time with her, I came to admire her determination to continue living as normally as possible while being continually aware that she was under what seemed to be a death sentence. Her tennis playing continued, as did her traveling, attending conferences, church, Bible study, and also sharing dinners with friends.

Caryl Matrisciana, with her beautiful British accent, lovely blue eyes, and a musical lilt to her voice, carried herself with unpracticed grace and elegance. She had a quick sense of humor and a heart of great compassion. Her love for the truth outweighed nearly every other interest that she had.

Having grown close to her in the past few years through my work at TBC and the fact that we have lived in neighboring towns in Southern California for the past five years, my appreciation for this lady’s skill and stamina is great. And yet she never boasted or took pride in any of her accomplishments, always acknowledging that the Lord was the one who brought the ideas and people into her life and opened the doors for the wonderful results. She never failed to seek guidance from men and other women in ministries as a safeguard to ensure the integrity of her work. She had had a close relationship with Dave and Ruth Hunt from earlier days, and that friendship remained strong until they both went to be with the Lord in 2013.

All of this has borne fruit through the materials that she has produced, which are carried and distributed by several sources including The Berean Call and Lighthouse Trails, among several other ministries. (We at TBC have carried and still carry many of her products including controversial DVDs, such as “Yoga Uncoiled” and “Exposing Christian Palestinianism.”)

A warrior who never walked away from a challenge, whether it be to her faith or to her health, Caryl sought to serve the Lord with all she had until the very end of her life. One evening, when it was evident that her cancer, despite all of her efforts and treatments and diets and prayers, seemed to be winning the battle, I went to visit her and her sister Jenny from England, who was staying with her for a while (and was truly a ministering servant to her sister). Caryl was in too much pain to even sit still at the table without crying out and went into the bedroom. Jenny and I had a nice conversation while we finished eating, and then she suggested that it would be perfectly all right for me to go in and visit with Caryl. We sat and talked at length about many things, among them trying to understand the “why” of her suffering. It was a question about something that, like Job’s situation, couldn’t be answered but only accepted.

Even as we wrestled through that subject, with both of us weeping a bit on and off, I saw her suddenly lift herself from the morass of pain and the indignity that she was being forced to endure as she asked me if I could help her to get a blog started. She said that in her present condition it was the only way that she had left to reach out in ministry to others. We discussed different subjects, and she settled on a title that would begin with the idea of being “Housebound – Satan Meant It for Evil, but God Meant It for Good.” She asked if I could do a little research and send her some ideas along those lines that would help her to get her creative juices flowing again. As we discussed different topics, she rallied and indignantly addressed several recent unholy movements in the body of Christ that were being promoted. We talked about the faithfulness of the Lord, and His goodness even through the darkness. I told her to sit still a minute and went into the bathroom to get a hand mirror. I gave it to her and said, “Look at yourself!” She looked into the mirror, not understanding. I said, “Caryl, when we were talking earlier, your features looked drawn and sad and defeated, but when we began to talk about the Lord and a way that He might be able to still use you, your face softened and that spark of light came back into your eyes. You look younger and you’re practically glowing!” She looked back into the mirror and smiled. “The Lord is so good to me,” she said quietly.

A couple of weeks later she bravely attended my backyard wedding. It was a very small gathering, but many who attended knew who she was and were honored to see her there. Only a few of us were aware of what it took for her to attend—her pain was unimaginable by that time. The Lord was her strength, yet we were the ones who were blessed by His helping her to be there.

It was only a little more than a month later that, after several failed attempts to reach her by phone or text, I finally spoke with her son Josh, who told me that his mom wasn’t expected to make it through the weekend. He said that I was welcome to visit her and that, even though she was unconscious, the medical people had said that she could probably still hear. I drove over there the next morning, but no one answered the door. Suddenly, someone was standing beside me, and I looked up. Josh, who lives nearby, was there, and I knew by his face that she was already gone. We hugged and cried a little and had a short, sweet conversation before I said goodbye.

On the drive home, my heart and mind were filled with many thoughts fighting with one another: joy over the release from her body that this sweet warrior is now experiencing as she beholds the actual presence of God; sorrow for those of us left here, who have to press on and carry on that fight in these times that grow harder each day.

Caryl Matrisciana was a one-of-a-kind woman, feminine to the core, and yet with the kind of fighting spirit that enabled her to dive fearlessly into dark places and expose the evil inside. She was blessed with a family who loved her and a multitude of friends who will miss her terribly.

The Lord was her Savior, her Rock, her Fortress. Because she allowed God to use her, no matter her trials and afflictions, in fighting for the truth of His Word, many of us have been the grateful beneficiaries of the grace and wisdom He bestowed upon her.

Thank You, Lord, for putting Caryl on this earth and also for gathering her to Yourself. We all long for the day when we, too, will see You face to face. Meanwhile, we ask for our own grieving hearts that You will give us comfort and also fill us with Your Spirit to be able to carry on the work that remains to be done here on this planet as so many of your fighting saints are being called home. Maranatha! Come quickly, Lord Jesus!

There are quite a few options for keeping in touch with us:

Subscribe to our email updates here, and choose if you want daily, weekly, or monthly updates.

Most of our content is published in our app for iOS, Andoid, Windows, and Kindle.  Click here to get the app!

The Berean Call is available by postal mail each month for free.  We are willing to send the newsletter to you by regular mail but encourage you to read it online to save printing and mailing costs. Send us a message to add or change your paper mail address.

The Berean Call is also available in a large-print edition at a nominal cost.

If you are outside the U.S. The Berean Call is available by paid subscription .